Freedom of expression and equal participation

The interdisciplinary research program EGALIBEX questions the relationship between freedom of expression and equal participation in liberal democracies, particularly in Europe. Can the legal regime governing the fundamental right to free expression ensure equal access for all to public debate?


Philosophy and legal theory have often questioned the external limits of freedom of expression, focusing on acts of expression that are deemed to threaten other freedoms or social interests; for example, defamation, incitement to racial hatred or apology for terrorism. Much less attention has been paid to the internal structure of this right, as set out in the provisions organizing access to public expression. However, these rules pose specific difficulties. They do not restrict freedom of expression in the name of other freedoms or independent interests. Rather, they seek to reconcile the free expression of some with the free expression of the others, so that all can participate on an equal footing in public communication, and in particular in democratic debate.

The rules governing access to physical or virtual forums today raise formidable political and legal dilemmas, whether it is about the use of public spaces or the regulation of digital platforms, the concentration of audiovisual media or the neutrality of the Internet. In liberal democracies, the law lays down some general principles – such as pluralism – that must make it possible to fairly organize the exercise of freedom of expression by all, without unduly restricting it. But these principles are generally not sufficiently determined in their content or prioritized to solve the problems faced by judges and legislators.

The ambition of the EGALIBEX research program is to contribute to the resolution of these dilemmas at the level of the philosophy of law. Its objectives are to identify, interpret and evaluate from the point of view of equality of participation the different legal principles that can organize freedom of expression.

To this end, the team members conduct :

A conceptual and genealogical analysis of freedom of expression as a political right whose primary purpose is to support democratic debate.

Funded by the French National Research Agency, the EGALIBEX research program brings together a multidisciplinary team of researchers in the humanities and social sciences (philosophy, law, political science and sociology of communication) to carry out these three tasks. 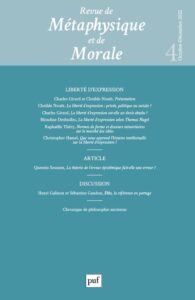